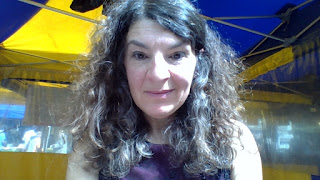 I'm not sure how many times I need to do street performing in order to call myself a regular, but I'm on my way.  It's been three times now.

I'll let you into a secret... I feel like a wild animal, or maybe a feral one.  So... I can decide at any moment to head out into the blue yonder and sing my lungs out (Yes, there are some Council restrictions in Oxford).   There is something extraordinary about taking away external permissions.    I have no audience to gather, no tickets to sell, no arrangement with said audience.  I'm just heading out and someone might enjoy what I do.

I am making up how to 'do it' as I go along.  I let the music take me.  I try to catch people's eye ... smile.  I want these posts to be about the experience, about the people I meet, about music and not just about me.  There's not much story in that.

Something happens sometimes with the spontaneous meeting of people that I couldn't prearrange if I tried (prearranging is not my top skill anyway).


So what do I write about here? I love telling stories, that is what I do with my own songs. When I write a story, there is some sort of measure of control, some process. I can introduce the characters and then stuff happens and I keep polishing the story, until it shines
Here I am just writing about some moments in time. I want to run ahead and look at the view from further on.

Who shall I write about?
Where is this story going?
Who are the main characters?

A few snippets off the top of my head... I could write about Dorothy from Ohtobe, who draws fabulous drawings of Oxford. She bought myself and Andrew an ice cream after my first session and always jumps up and down with enthusiasm over this singing thing of mine.  Thank you, Dorothy.

I could write about Yeshi from Taste Tibet, who sells yummy food and gave me some lunch after my tented session. Thank you, Yeshi.

I could write about Ricardo, who works at the market and played knight in shining armour, when I had an interesting time with a fruit and vegetable family. Thank you Ricardo.

I could wax lyrical about how extraordinary it is to sing, at full whack, under a blue sky.

I could say how lovely it is to see people smile and some dance and bob around to the music.

Oddly, the incident that has borne the most fruit so far (no apologies for the cringeworthy pun..) ...was when the family of fruit and vegetable sellers did lots of shouting at me before I'd started playing...and so I moved. Thank you fruit and vegetable family! Hang on a minute Karen... are you completely nuts?

After shouting at me, the son (I believe it was the son), brought his pile of raspberries over to where I was standing and began to shout 'Raspberries... 'Pound punnet' (something like that) I smiled and said ' I can see what you are doing' and he replied ' Yes, and I won't stop until you leave'.

From my perspective, I knew that part of doing this music thing is an attempt to add something lovely to the day. It was certainly not to force enjoyment on anyone. 'No, you will listen to my music and enjoy it!' … sounded a bit bizarre. Ricardo went away for a bit, came back and offered me a stall.

So why the 'thank you fruit and vegetable family? Well, it gave me the beginnings of an idea for a new song. I could hear the beginnings of a chorus in that 'Raspberries' shout... and more ideas are growing out of that. It started as a bit of a getting my own back, but the idea keeps growing into something potentially rather beautiful. What's not to love about that?

Today I am thinking of myself as a story snippet gatherer. Going out and gathering bits of stories and saving them up for later. Oh, hang on a minute... I've already written a song about that … (set in a coffee shop)...curiouser and curiouser...

Another thought occurs to me too. Is it possible that we are ultimately just stories in bodies? A collection of cells jammed packed with gooey stuff and stories?